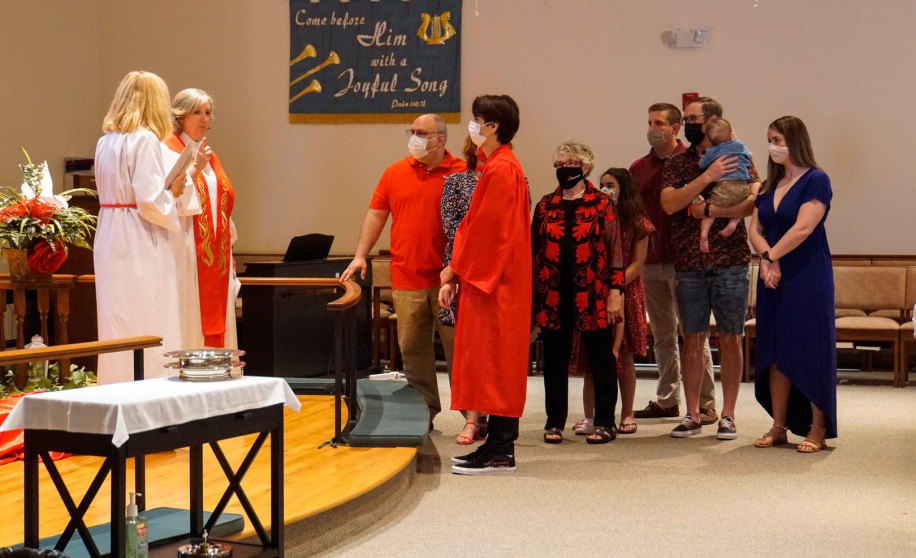 Welcome to Lutheran Church of the Covenant Gather.....Grow.....Give.....Go

God calls Jeremiah to be a prophet and consecrates him in the womb. Jeremiah’s task is to preach God’s word amid the difficult political realities of his time, before the Babylonian exile. He is to make God known not only to Judah, but also to the nations.

4Now the word of the Lord came to me saying,
5“Before I formed you in the womb I knew you,
and before you were born I consecrated you;
I appointed you a prophet to the nations.”
6Then I said, “Ah, Lord God! Truly I do not know how to speak, for I am only a boy.” 7But the Lord said to me,
“Do not say, ‘I am only a boy’;
for you shall go to all to whom I send you,
and you shall speak whatever I command you.
8Do not be afraid of them,
for I am with you to deliver you,
says the Lord.”
9Then the Lord put out his hand and touched my mouth; and the Lord said to me,
“Now I have put my words in your mouth.
10See, today I appoint you over nations and over kingdoms,
to pluck up and to pull down,
to destroy and to overthrow,
to build and to plant.”

1In you, O Lord, have I | taken refuge;
let me never be | put to shame.
2In your righteousness, deliver me and | set me free;
incline your ear to | me and save me.
3Be my strong rock, a castle to | keep me safe;
you are my crag | and my stronghold.
4Deliver me, my God, from the hand | of the wicked,
from the clutches of the evildoer and | the oppressor.
5For you are my hope, | O Lord God,
my confidence since | I was young.
6I have been sustained by you ever since I was born; from my mother’s womb you have | been my strength;
my praise shall be al- | ways of you.

Christians in Corinth prided themselves on their spiritual gifts. Paul reminds them that God gives us many gifts through the Holy Spirit, but the purpose behind all of them is love, the kind of love that God showed us in Jesus Christ.

1If I speak in the tongues of mortals and of angels, but do not have love, I am a noisy gong or a clanging cymbal. 2And if I have prophetic powers, and understand all mysteries and all knowledge, and if I have all faith, so as to remove mountains, but do not have love, I am nothing. 3If I give away all my possessions, and if I hand over my body so that I may boast, but do not have love, I gain nothing.
4Love is patient; love is kind; love is not envious or boastful or arrogant 5or rude. It does not insist on its own way; it is not irritable or resentful; 6it does not rejoice in wrongdoing, but rejoices in the truth. 7It bears all things, believes all things, hopes all things, endures all things.
8Love never ends. But as for prophecies, they will come to an end; as for tongues, they will cease; as for knowledge, it will come to an end. 9For we know only in part, and we prophesy only in part; 10but when the complete comes, the partial will come to an end. 11When I was a child, I spoke like a child, I thought like a child, I reasoned like a child; when I became an adult, I put an end to childish ways. 12For now we see in a mirror, dimly, but then we will see face to face. Now I know only in part; then I will know fully, even as I have been fully known. 13And now faith, hope, and love abide, these three; and the greatest of these is love.

People in Jesus’ hometown are initially pleased when he says that God will free the oppressed. Their pleasure turns to rage when he reminds them that God’s prophetic mission typically pushes beyond human boundaries so that mercy and healing are extended to those regarded as outsiders.

21Then [Jesus] began to say to [all in the synagogue in Nazareth,] “Today this scripture has been fulfilled in your hearing.” 22All spoke well of him and were amazed at the gracious words that came from his mouth. They said, “Is not this Joseph’s son?” 23He said to them, “Doubtless you will quote to me this proverb, ‘Doctor, cure yourself!’ And you will say, ‘Do here also in your hometown the things that we have heard you did at Capernaum.’ ” 24And he said, “Truly I tell you, no prophet is accepted in the prophet’s hometown. 25But the truth is, there were many widows in Israel in the time of Elijah, when the heaven was shut up three years and six months, and there was a severe famine over all the land; 26yet Elijah was sent to none of them except to a widow at Zarephath in Sidon. 27There were also many lepers in Israel in the time of the prophet Elisha, and none of them was cleansed except Naaman the Syrian.” 28When they heard this, all in the synagogue were filled with rage. 29They got up, drove him out of the town, and led him to the brow of the hill on which their town was built, so that they might hurl him off the cliff. 30But he passed through the midst of them and went on his way.

Recommend this page on: